Signs displayed, in chronological order (click to go to a page):
FREE HELP WITH HOMEWORK ANY SUBJECT; DON'T THINK; THERE'S NOTHING WRONG WITH YOU; THIS SIGN WILL NOT BE SHOWN ON TV; THE DECEIVED ARE COMPLICIT IN THEIR DECEPTION; I AM NOT GAY; EVERYTHING'S EXACTLY THE WAY YOU WISH IT WEREN'T; COME UP IF YOU KNEW ME IN ANOTHER LIFE; DO YOU DESERVE AN EDUCATION?; IS STANDING HERE WITH THIS SIGN A RADICAL ACT?; MONEY IS NOT REALLY REAL; IN HITLER'S GERMANY UNIVERSITIES WERE SILENT; IS THIS SIGN ANTI-SEMITIC?; DOES THE INTERNET KNOW MORE THAN YOU?; WHAT IS THE DIFFERENCE BETWEEN YOU AND ME?; THERE IS NO TIME; YOU ARE NOT FREE; YOUR THOUGHTS REFLECTED HERE; BEAT WOMEN; YOU ARE GOING TO DIE; THE POLICE WERE CALLED BECAUSE OF THE BACK OF THIS SIGN

"YOU ARE GOING TO DIE" 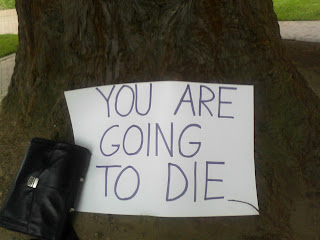 "YOU ARE GOING TO DIE"

...which resulted in a complaint by someone to the police, a conversation with the police, and my writing on the back of the sign and putting up: 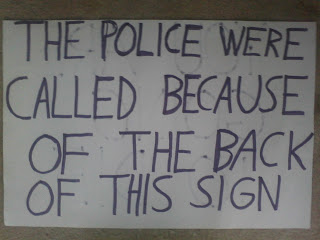 "THE POLICE WERE CALLED BECAUSE OF THE BACK OF THIS SIGN"

...which attracted fewer people than I would have anticipated (are students so fearful? are they completely uncurious?). The sign did, however, attract curiosity seekers of different species: 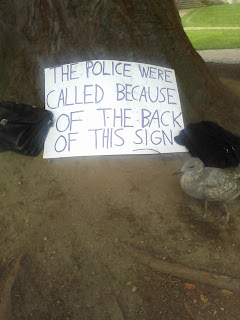 This first sign was up for exactly one hour before I decided to take it down. I did so because two university police officers informed me that if there were someone standing on the Quad near my sign who then said to them that they felt their life was directly threatened by the content of my sign, they would have to take me to jail. (See the complete transcript of my conversation with them below). News of the sign was posted on facebook within two hours of putting the sign up.

Reactions to the messages:

- some agreed that there is value in contemplating one’s mortality

- one guy said he found some of my signs inspiring, but this one he found unpleasant

- one girl said, “The police were upset with that sign? It’s just a fact; a philosophical statement.”

For a complete transcript of discussions with people about this sign (or at least as complete as memory would allow), see here, March 31.

Here is the full transcript of the conversation with the police:

11:53 I see two police officers come out of Miller Hall

12:20 Will comes up, dressed all in black as usual
- [the police address Will] are you connected with this sign? - no, i just came up to look... - so, again, we're not telling you to take down the sign; but if we get a complaint we'll have to come out here again - ok - goodbye - goodbye

With respect to the interpretation of perceivers of forms of expression trumping the intention of the author of that expression...

In 2008 some male students at Colorado College composed and distributed anonymously a flyer they called “The Monthly Bag” that parodied a flyer from the feminist and gender studies program called “The Monthly Rag.” The parody flyer included references to: "tough guy wisdom," "chainsaw etiquette," the range of a sniper rifle, and a quotation about "female violence and abuse" of men from the website batteredmen.com. The college subjected the authors of the parody flyer to an hours-long hearing and disciplinary letters were placed in their official files. [you can read about the incident here].

In a letter to one of the students responsible for the parody flyer, the Vice President for Student Life/Dean of Students of Colorado College wrote:

”I recognize that your intent in posting the publication was not to threaten but to parody. But in the climate in which we find ourselves today, violence—or implied violence—of any kind cannot be tolerated on a college campus. I believe the issue here is not whether or not you intended to threaten anyone. The fact is that your publication was received as a threat by members of the Colorado College community. The content of “The Monthly Bag,” in particular the juxtaposition of weaponry and sexuality, combined with the fact that is was distributed anonymously, led it to be received as a threat. As a liberal arts college, we pride ourselves on the free exchange of ideas in pursuit of education, and we support freedom of speech. However, as a private institution, we cannot support forms of speech that disrupt our community to the point of causing members of it to feel threatened or afraid.”

The full text of the letter is here.

Posted by signsonthequad at 10:16 PM

“If you know you are oppressed you are free, and those who have no awareness of this are truly enslaved.”
- Aug Tellez